What is a Mule? 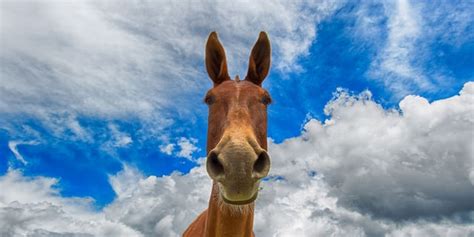 There is generally a lack of knowledge and much snobbery about mules in the equine world. So, what does make a mule different from a horse?

A mule is the offspring from a male donkey (jack) and a female horse (mare). The less common but similar hinny is a cross between a horse (stallion) and a donkey (jenny). A horse has 64 chromosomes and a donkey 62, the mule has 63 and can be male or female but because of the odd number of chromosomes, both mules and hinnies are sterile. A male mule is usually gelded in order to make him safe and sociable.

Mules have got numerous advantages over a horse, they look similar to horses but the muscle composition is different and they have greater physical strength for their size, therefore greater endurance. Mules are more intelligent than horses having an abundance of common sense and a strong desire for self-preservation. This has earned them a reputation for being stubborn for some reason!

Mules have a natural attraction to humans and when treated with kindness, patience and understanding they learn to trust and obey. If treated with force and abuse, they are not likely to comply with your wishes.

Every owner knows the danger of overfeeding grain to a horse — it can result in a potential bout of colic or laminitis. Not only do most mules not require grain, even if in regular work, but they don’t tend to overeat it. Although it’s a myth that mules don’t contract laminitis or the more serious condition known as founder, it is true that they are less prone to it than horses because of their sensible eating habits. Generally, mules need less hay than horses, the hay doesn’t need to be top quality and good quality straw is recommended.

Overall, mules tend to be healthier, sounder and live longer than horses. This might result from hybrid vigor, the genetic superiority of crossbred animals. Mules are less prone to injuries because they’ve got a good sense of self-preservation. While detractors call them “stubborn,” in reality the mule isn’t going to overexert or overextend himself the way a horse can. Mules usually have good, strong feet that don’t require shoeing.

It’s not a coincidence that mules are favored over horses for packing or riding in mountainous terrain. That’s because the mule has a reputation for being more surefooted than his equine cousin. His feet are smaller and more upright than those of the average horse, which contributes to his surefootedness. If you’re traveling on a trail with a steep drop on one side, that’s a quality you appreciate. Mules also don’t panic as easily as horses if they get themselves in tight situations.

Horse versus mule intelligence is somewhat subjective. Back in 1957, Sports Illustrated asked some of the top people in equine competition whether a mule or horse was more intelligent. These interviews took place at the prestigious National Horse Show held at New York City’s Madison Square Garden. Lieutenant General Blackshear M. Bryan, Commander, First United States Army, replied, “Mules are no exhibitionists, and they tend to be ‘cussed and ornery,’ as well as ‘set in their ways’ but, when compared in intelligence to horses, you are insulting the mule. When thirsty, mules will drink only what is necessary, while horses will drink their fill at once if allowed to do so.” Adrian Van Sinderen, president of the American Horse Shows Association, responded, “A mule is much safer. I believe I know as much about mules as I know about horses. They’re ornery critters and they often do what they want, not what you want. But a mule will take better care of a man.”